During recent flooding in Yibin county, in China's Sichuan province, an unknown photographer captured this picture of two men rescuing a pig from a flooded outbuilding. The hog in question – with the blissed-out smile of someone who has just washed down diazepam with a glass of wine – is the visual embodiment of 'fucked up, but happy'.

Since Reddit users love nothing more than to milk a joke far beyond the point of absurdity, it didn't take long before the picture was uploaded to the Photoshop Battles subreddit to explore the sillier realms of human creative endeavour.

And here are the magnificent results:

After seeing his brothers and sisters chopped into pieces, the jolly piggy is not so jolly anymore. 'Babe: Pig of War.' If you were born after 2000 then you're too young to get this reference. When a meme is all the rage you do your best to shoehorn it in any way you can. If you imagine that they're actually carrying a severed head then the photo takes you somewhere far darker.

Face swap is like pizza: you never get tired of it.

Anybody who's gone to Temple Bar for a 'quiet pint' knows that there's only one way you're getting out of there. After the horrors of the slaughterhouse, war is no big deal to this indefatigable porky. 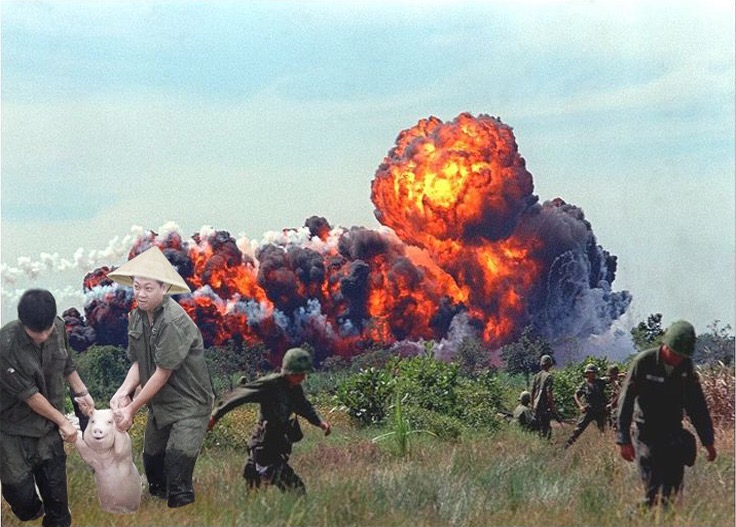 You know the sort: the typical carnivore whose only argument against vegetarianism is 'Mmm... bacon!'