The macabre legends behind the 'Beauty and the Beast' fairy tale

In traditional societies, myths were often a way of establishing certain basic social and moral rules in the collective unconscious. Incest, for example, is forbidden in almost all cultures, and this is reflected in their stories which tend to share many common features.

And although we no longer believe in the existence of men with horses' legs or villages populated by dog-headed people, these myths continue to be passed down from generation to generation through folktales, urban legends, medieval exemplum, films and comics.

Such stories are continually readopted and adapted to meet the needs of each new generation. They are used to explore, warn, explain and construct.

One tale that has been passed down to us over the ages and adapted many times (while retaining its essence) is 'Beauty and the Beast', which is in the news again thanks to Disney's new live-action remake.

We all know the story from Disney's 1991 animated version: a girl falls in love with a monster and, eventually, her love for him turns him into a handsome prince. The moral of the story? Beauty lies within.

One reading of the film is that it's a defence of 'real men': under all that hair beats a noble heart! But if we look carefully at the genealogy of 'Beauty and the Beast' and the context from which the different versions of the story arose, we can get a better understanding of the dark symbolism at the tale's core.

Many experts believe the origin of 'Beauty and the Beast' to lie in a second century tale by the Roman writer Apuleius called 'Cupid and Psyche', included in his novel The Golden Ass.

Some of the basic elements of the fairy tale are already present in Apuleius's story: the heroine (Psyche) is the youngest and most beautiful of three sisters. The goddess Venus, jealous of Psyche's beauty, orders Cupid to make her fall in love with the most horrible man in existence.

But the trope of the beautiful young woman falling in love with a fearsome animal is not exclusive to Apuleius's tale. It is a common theme in world literature. In the Middle Ages it took many forms, especially frequent in collections of stories that reached Europe from the East, and in the exempla – stories, jokes and fables that medieval preachers used to explain and illustrate their teachings to illiterate audiences. 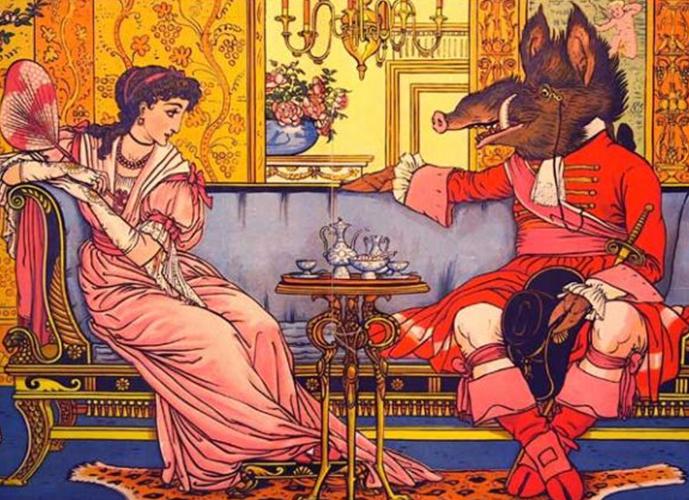 The origins of 'Beauty and the Beast' also lie in The Pleasant Nights, a collection of stories by 16th century Bocaccio imitator, Giovanni Francesco Straparola.

One of these stories, 'The Pig King', tells of a prince who is cursed by fairy magic and born in the form of a pig. After marrying two sisters who try to kill him out of disgust (and who he kills in self-defense), the third, youngest sister returns his caresses. The spell is broken, and the prince takes off his pigskin to reveal her sexy new hubby. He then becomes king and rules with her as his queen.

This story was compiled by Perrault in his Tales of Mother Goose in 1697, and several writers adapted the story over the course of the 18th century, including Madame d'Aulnoy, Gabrielle-Suzanne Barbot de Villeneuve and Jeanne-Marie Leprince de Beaumont. The last two introduced many of the elements that are familiar to us today, such as the merchant father, the evil sisters, the castle, and so on. Beaumont's version was the main inspiration for most of the movies.

However, the heart of the story hasn't changed that much since Straparola: it doesn't really matter if you marry a horrible man (symbolised by his non-human, bestial nature) because love conquers all.

Return his caresses and he'll stop being such a pig.

'Beauty and the Beast' explores a theme that is very common in medieval literature: how young girls should behave towards their husbands in cultures dominated by marriages of convenience.

Since it was common practice for families to marry their teenage daughters to men who were complete strangers – and often much older – for economic reasons, there was a need to teach these girls that such a thing was fitting and proper.

The monster would turn into a handsome prince if they agreed to have sex with him.

But if 'Beauty and the Beast' was originally designed to reinforce the social, sexual and cultural conventions of the medieval period, why, we might ask ourselves, is such an outdated and sexist tale still being told today? Why would Disney decide to do a remake of a story with such a moldy old message? 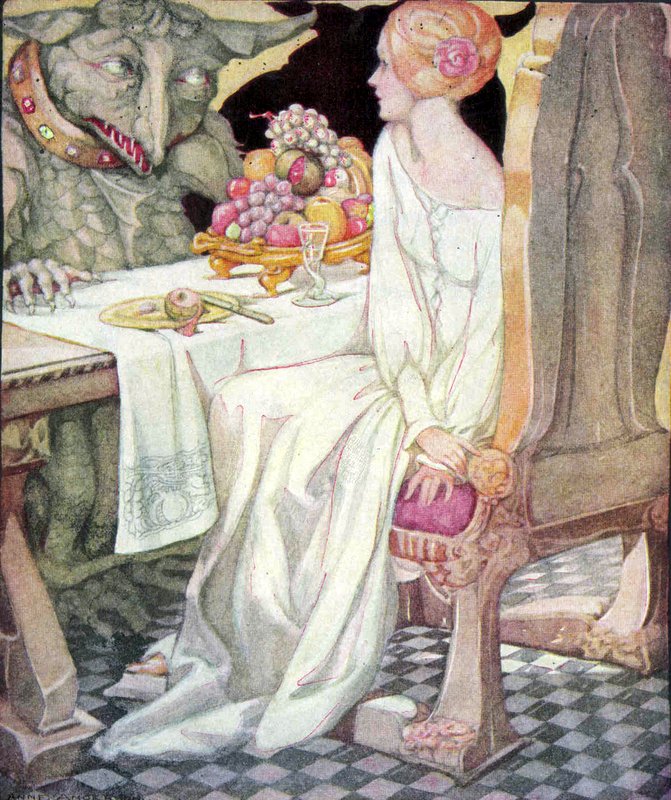 The easy answer would be that the content has changed; that while the plot has stayed the same, the meaning has evolved, and that today, 'Beauty and the Beast' is really about how beauty lies within.

But perhaps there's another answer: perhaps the mythical substratum is still integral to the system, and that's why Disney — a conservative company, often accused of racism and sexism — is still so interested in the story.

200 years ago, Moratín's play The Maidens' Consent satirised the arranged marriages that were so frequent in 19th century Spain. And yet we know such practices are still common in many places today.

And we also know that even in Europe, a strain of this thinking remains: 'Your sugar daddy doesn't know how to do the laundry or cook dinner?'

'Don't worry, he can learn after you're married.'