Artículo A goldfish in a wheelchair conquers the internet News

A goldfish in a wheelchair conquers the internet

Taylor Dean is a 19-year-old YouTuber from San Antonio, Texas, who uploads educational animal videos. Her friend Derek, 20, works at an aquarium shop in the same city.

A customer recently came to Derek with a goldfish that was suffering from swim bladder disease – a disorder that prevents fishes from controlling their buoyancy in the water. When the bladder is infected or deformed it can cause a fish to float to the top of the water, swim upside-down, or lean heavily to one side.

As this particular fish's problem was incurable – meaning it was condemned to spend its life stuck at the bottom of its tank – Derek had an idea for a way to help the little invalid out: he made a tiny goldfish wheelchair.

My friend made a wheelchair for a goldfish pic.twitter.com/QghXTY7rme

The story already has more than 25,000 retweets, 75,000 likes and and a whole load of comments – mainly expressing delight at this touching display of kindness towards our fishy friends.

i love the wheelchair goldfish more than i love myself

ive cried 4(?) times today one of them was bc of that goldfish with a wheelchair

And although most users have nothing but love for Taylor and Derek...

@taylorndean you are teaching people that all animals no matter their handicap deserve love and support to live a normal life.

...there's just no pleasing some people.

imagine making a wheelchair for your goldfish but still eating meat

Others are desperate to see the contraption in action.

@taylorndean please video tape and post the goldfish swimming in his wheelchair- I really want to see him using it. So cute.

But so far Taylor has just added a couple of photos to show that the fish is doing just fine. 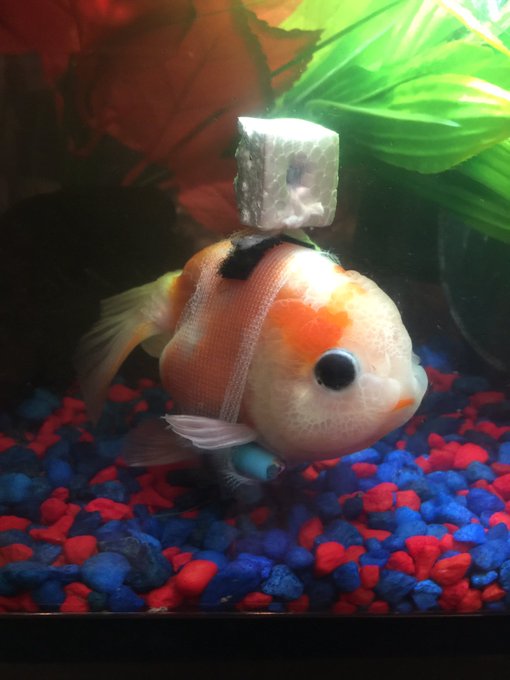 Just wanted to let you guys know wheelchair fish is still doing well and got an even more comfortable wheelchair pic.twitter.com/AwjeJU0pFL

But, just to give you an idea, here's another fish in a wheelchair. And by the looks of things, he's doing just swimmingly.