One of pop culture's most widespread conspiracy theories has reemerged

Avril Lavigne must be getting used to being dead by now.

One of pop culture's most widespread conspiracy theories is back. Avril Lavigne is dead. Again. Whose fault was it this time? This Twitter feed:

avril lavigne is dead & was replaced by a look alike: a conspiracy theory thread pic.twitter.com/9eearQ2rte

The Avril-is-dead theory originated on a Brazilian fansite back in 2011.

This site posited that Lavigne, overcome with the pressure of following up her debut album and sick of her fame, killed herself in 2003 and was substituted by a double called Melissa Vandella.

Two years after the theory first emerged, it has gone viral once again, all thanks to the aforementioned tweet. Online conspiracy theorists have been quick to find 'evidence' that proves that the Avril we all think we know is actually a doppelganger called Melissa.

A Twitter user called Kelly Blaus reckons Melissa tried to tell us what was going on in songs like Nobody's Home and My Happy Ending. And the paranoia spread among Lavigne fans like wildfire...

@givenchyass Okay so I was looking at these and the corners of their eyes are shaped differently and now I'm geeking pic.twitter.com/ag2G37NsSt

Some users used the hashtag #NotMyAvril to accuse their erstwhile idol of doing things that the 'original' Avril would never do. 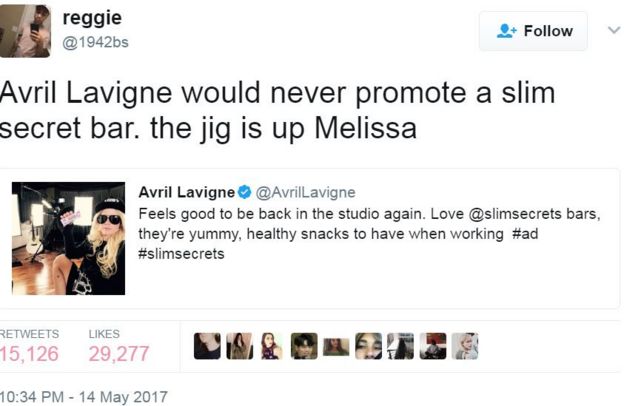 Poor Avril. Her fans are more excited about the prospect of her being dead than they are about her new music.

But this is far from being the only case of a celebrity that fans have bumped off and replaced with a double:

In 1969, the rumour spread that Paul McCartney had died and been replaced with a look-alike before the release of Abbey Road. Fans drove themselves crazy ransacking the songs for clues confirming the theory. Many were convinced that in 'Strawberry Fields Forever' John sings 'I buried Paul'.

Taylor Swift is, according to some theories, a clone of Zeena LaVey, the daughter of the founder of the Church of Satan; while Beyoncé is apparently Queen of the Illuminati, and the reason she looks a bit different each time she drops a new album is because she keeps cloning herself.

Is it just me or do people have way too much time on their hands?