Three boys beat a flamingo to death at a Czech zoo

'First they pelted them with stones,' zoologist Jan Vašák told the Prague Morning news site. 'Then one of them kicked it.'

The dead flamingo was a 16-year-old father of eight. He had survived the massive floods that inundated Prague in 2002, soon after which he was transferred to a zoo in Jihlava – a small city 128 km from the capital. The attack was so brutal that the bird suffered a broken leg and numerous severed arteries before bleeding to death.

The boys – aged five, six and eight – broke into the zoo and scaled a fence to reach the flamingo enclosure. They then attacked the flock of 60 birds by hurling sticks and rocks. Another bird sustained serious, but not life-threatening, injuries. 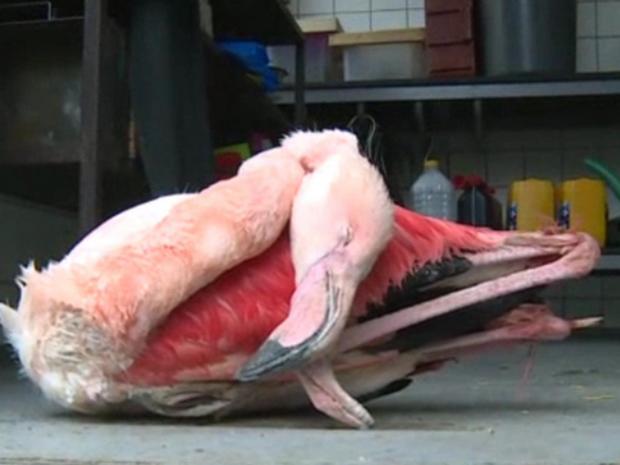 A technician heard an 'unusual sound' and headed over to the enclosure, at which point the three boys fled. However, one of them was wearing a bright yellow sweatshirt, making it relatively easy for police officers to find them.

'We immediately phoned police officers and so two of the villains we managed to catch. The third escaped.' The boys were taken into custody but would not speak to investigators. They face criminal offences, but won't be punished because of their young age. However, their parents might have to compensate the zoo for $2,000 of material damages.

Zoo spokesman Martin Maláč questioned why the children were not in school, given the time of day. He also told press that the boys had expressed no remorse for what they had done.

Does anyone need any further proof that the only thing zoos teach people is that they have power over animals?

Humans could be facing extinction, and male sperm is to blame

This is Óscar Pérez: the ‘Warrior of God’ behind the helicopter attack o..