It should have been an excellent day for Cristiano Ronaldo. He had been invited to the inauguration of the newly renamed Cristiano Ronaldo Airport in Funchal – the city of his birth – on the island of Madeira. The president of Portugal was there, along with the prime minister. All of them standing proudly beside a bronze bust of the soccer star, covered with the national flag. A historic moment. But then, the flag is pulled away to reveal...

Somebody hit poor Ronaldo with the ugly stick. 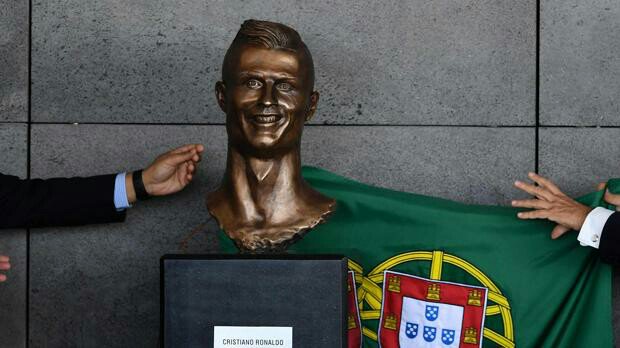 The bust is hard to describe, but we'll do our best. Tiny eyes, vacant gaze, misshapen jaw – reminiscent of the Forever Alone meme, neck like the trunk of a thousand-year-old oak, and an Adam's apple the size of a grown man's fist.

If the sculptor was attempting a homage to Sloth, from The Goonies, then he should be applauded for his success. But the bust can't really be considered a faithful reproduction of modern football's most famous face, whichever angle you look at it from. Perhaps it's a question of karma. Apparently, the citizens of Madeira were not overly keen on having their airport's name changed to that of their island's most famous son. A number of social groups expressed their frustration at the fact that Ronaldo's name and image are already plastered all over the island. The disgruntled residents even tried (unsuccessfully) to get parliament to reverse the decision, which had originally been made by the regional government.